Dialogue can help stop polarisation and increase social inclusion. That’s the firm belief of 24-year-old student Maria from Greece. During her master’s ‘Youth, Education and Society’ at Utrecht University she interned at Utrecht in Dialoog. She did not only host a lot of dialogues but she also investigated the potential of using dialogues as an educational tool and the self-perceived benefits that dialogues could have on minimizing social polarisation and maximizing social inclusion. The power of dialogue through the eyes of Maria Chatzidionysiou.

Where it all started 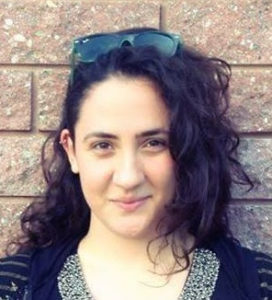 Years ago, Maria interned as a preschool teacher in Greece. That was when she first really noticed the value of dialogue. “I saw a lot of educators looking down on children instead of having a real conversation with them. I do understand why: a child doesn’t engage in a conversation the same way an adult does. But that doesn’t mean that children don’t have their own opinions and experiences that they would like to share. I think it’s very important to make children feel like those opinions and experiences are heard and valued.”

Maria has travelled a lot. She describes herself as ‘not really the kind of person that stays in one place’, though she might want to settle down one day. Her travels are the second thing that made her very aware of the importance of a good dialogue. “I noticed that in a new environment the only way of learning is through others. The only thing you can do is respectfully listen and not judge anyone. Because you want to feel save from both sides.” On a darker note she has experienced social polarisation in every country she travelled to. “Yes, also in the Netherlands. When I came here, there was a lot going on. The farmers were protesting, the teachers were protesting and the Black Piet debate was very polarized. These were things that pushed me towards doing my research on this subject and that fitted perfectly in the belief of Utrecht in Dialoog that in conversations, society can come together. And I really liked that because, as I said, I think dialogue is really essential in moving education and society forward.”

Saying the same but different

The way we handle dialogue obviously differs per county. 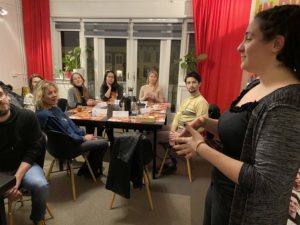 What stuck with Maria is that Dutch directness might not always be as direct as is seems to be: “Greek people may not be that direct in what they want to say, but at the same time if they don’t want to have an honest conversation or dialogue they will not. I feel that in the Netherlands people are a lot more direct in what they want to say, but sometimes it feels like people pretend to listen even though they already have an opinion. What they’re actually saying is: I’m never going to accept what you say but I am going to engage in the conversation anyway. In Greece someone wouldn’t have the conversation in the first place. In both cases you end up with nothing, but the difference is in the way people interact with each other.”

Another reason Maria chose to research this subject is because she wants to make an impact: “I didn’t just want to do an academic research for the purpose of doing it. I wanted it to be useful. Utrecht in Dialoog has the theme belonging. For my research I transformed it in ‘social inclusion’ to integrate the academic point and match my background. All the dialogues we organized together were about belonging. How do I belong in love, in the city, in my body? What I love about the dialogues is that there is a structure and a purpose behind them.” Maria sees why dialogues are so important for native Dutch people but she also felt that the group of people that weren’t born in The Netherlands that join the dialogues could be bigger. “I thought it was really interesting to see how we could get more expats or refugees to come to the dialogues. I think that the dialogues can help the people that don’t have the Netherlands as their first home a lot. As a foreigner in the Netherlands it’s easy to feel safe because everyone speaks English very well and everyone is nice enough to help. On the other hand, there are a lot of complicated administrative things that are all in Dutch. With those things you really need the help of a Dutch person.” 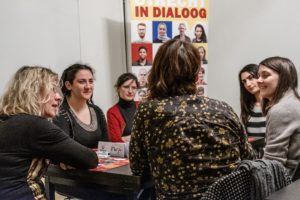 During her research Maria came across interesting findings. One of them was the fact that people that have the same background do not always share the same beliefs. “There were two participants that were asked if a dialogue can be used in an educational setting. One said that it’s not possible because science is supposed to be challenged and, in a dialogue, you are asked to not challenge someone’s opinions. Another participant with the exact same background and age said the opposite. He said that for instance in bio-ethics it is very important to have open and honest conversations about what is ‘right’ and what is ‘wrong’.”

A little wiser herself

In the end, her research and her time at Utrecht in Dialoog did make Maria more sure of the importance of dialogue to attain more social inclusion: “because my research was qualitative and not quantitative I didn’t have a strict hypothesis. But in the end, I do believe that dialogues can be used in reducing social polarisation. Because of the fact that dialogues make you talk about things. One of the participants put it really nicely: he said that dialogues challenge the ideas that you have about yourself and how open you are to actually listen to others opinions without judging them. Often, when we talk about things or people we never actually meet, while we should be talking with those people instead of about them. That’s why it’s so important to have these dialogues. So we can talk with people from different groups and they can speak for themselves and listen to other perspectives.”

“For me it really helped me look at my own opinions more critically, too. Subconsciously I have these beliefs. For instance, about people that vote for certain things. But in the end people are such multi-layered and complex beings. For me social inclusion doesn’t mean that everyone should agree on everything. Even in a perfect society not everyone agrees. But that doesn’t mean everyone can’t be included.”

Maria’s Master Thesis: The impressions of Dialogues and their educational use >>>